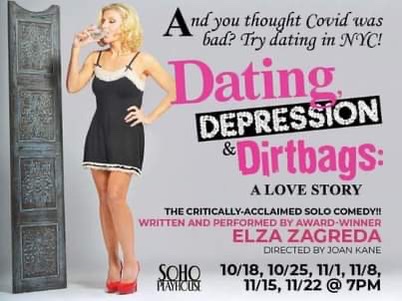 written and performed by Elza Zagreda directed by Joan Kane

After her Prince Charming turns into the Prince of Darkness, Elza dries her tears, straps on her pink Bottegas and embarks on a journey to find love again; not easy to do in a city where single women outnumber single men by 5 to 1 and COVID got all the good ones! Turning heartbreak and tragedy on its ass with heartfelt humor, wit and 3 Boosters, Dating, Depression & Dirtbags: A Love Story is painfully real and a laugh out loud funny take on the bizarre New York City dating scene. Only the names have been changed to protect the guilty.

A graduate of Fordham University and NY, Elza Zagreda is an actress, writer and comedienne. Elza has written and performed 4 solo comedies since 2005 including Corn Bread & Feta Cheese: Growing up FAT & Albanian, DIVORCE! Albanian Style!, The BEST of ELZA: Growing up FAT, Albanian & … Divorced!?!?, and Dating, Depression & Dirt Bags… A Love Story. Her plays have garnered both critical and popular reviews in New York, Los Angeles, Detroit and Boston. She is honored to see her characters from her plays (namely wacky Aunt Shirley and the Albanians in the Bronx who hide guns in their underwear) make an appearance in Anne Giordano’s play The Resistible Rise of Fatlinda Paloka. Elza starred in the New York City 2010 production of that show presented by Ego Actus.

“Most likely any woman (or perhaps man) who has had to deal with their own romantic woes will identify with Zagreda’s humorous story of journeying towards inner strength and recovery.”

“…While the show is about an actual heartbreaking experience, Zagreda manages to find and share the humor of it to her audience.”