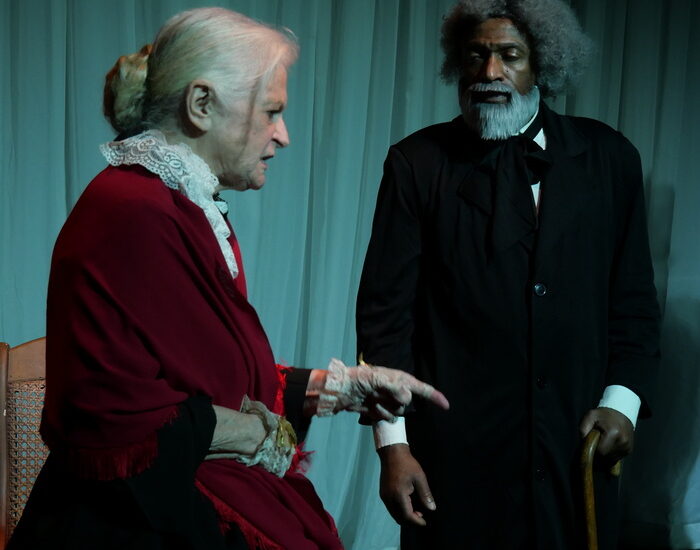 Susan B. Anthony recounts her life struggles and political maturation in the context of a press interview with Nellie Bly, the famed reporter who was a pioneer of investigative journalism.

In a time of deliberate campaigns of voter suppression through a variety of means, women’s rights are increasingly under attack. All of which makes it seem obligatory to revisit the life struggles of historic female activists and be inspired by their brave campaigns for fundamental rights. From October 12 to 16, 2022 Theater for the New City will rise to this challenge by presenting Susan B. by Toby Armour, a one-act bioplay on the great suffragist Susan B. Anthony, directed by Joan Kane. At selected performances members of the League of Women Voters of the City of New York offered voter registration in the theater lobby. Representatives of the League will conduct post-play discussions on Friday, October 14 and Saturday, October 15.

In the effort to attract new voters, admission to the play is free to anyone with a college or university ID. Paid tickets are $18 general admission and $15 seniors. Get tickets at www.theaterforthenewcity.net, information at 212-254-1109.

In the play, Susan B. Anthony recounts her life struggles and political maturation in the context of a press interview with Nellie Bly, the famed reporter for the Pittsburgh Dispatch and New York World who was a pioneer of investigative journalism. Amy Losi appears as Elizabeth Cady Stanton, whom Susan B. regarded as her teacher, inspiration and philosopher. Stanton regarded Anthony as her General who planned, organized and turned ideas into action. A ensemble of actors play convention delegates, townspeople, voices of derision, New York State legislators and others who provide context for Ms. Anthony’s remembrances. Much of the dialogue is in Susan B. Anthony’s own words.

“Theater for the New City again presents an exciting, stimulating, and globally entertaining work.” Edward A Kliszus in OpeningNight.Online

The play was developed at Theater for the New City under the direction of the late George Ferencz between 2014 and 2020. Part of it was presented by TNC as a radio play to celebrate Women’s History Month from March 28 to to April 11, 2021. A two-part version, titled Aunt Susan and Her Tennessee Waltz was presented by TNC April 28 to May 15, 2022 directed by Joan Kane. That production’s second part dramatized the efforts of Carrie Chapman Catt, Juno Frankie Pearce and others to achieve ratification of the 19th Amendment in Nashville in 1920. Susan B. is part one of that production. Kathleen Moore as Susan B. Anthony and Amy Losi, John Cencio Burgos and Sam Arthur reprise their roles.